After a challenging 18 months for schools and musicians we were delighted to be able to offer a ‘live’ education and outreach programme for the tenth anniversary of the Festival. This included our ever popular Schools Concert, but also several new ventures which resulted in us having a wider and deeper impact with young people than ever before.

The two Schools Concerts featured students from The Purcell School for Young Musicians directed by Paul Hoskins playing movements from a chamber version of Holst’s Planet Suite arr. by George Morton, presented and illustrated by the artist James Mayhew. This is a magnificent work in its own right, but has the added benefit of creating links with the primary science curriculum (including the latest from NASA’s 2020 Mission to Mars with Perseverance Rover and the Lucy mission to Jupiter’s asteroids) as well as exploring a variety of creative opportunities in art and English. James Mayhew is a well-known illustrator of children’s books, but also has significant experience in bringing concerts for children to life with his imaginative and colourful drawing jamesmayhew.co.uk/concerts

This creative combination of music, science and art, performed by local young talented musicians for primary school children in Hertfordshire was a feast for all the senses and a marvellous opportunity for them to hear quality live chamber music in an atmospheric and historical setting.  All primary schools in the Welwyn-Hatfield area were invited to apply for some of the 300 free tickets. The concerts were vastly over-subscribed, but were also recorded and sent free to view, to all primary schools in Hertfordshire along with a teacher support package. The film can be viewed through this link.

This creative combination of music, science and art, performed by local young talented musicians for primary school children in Hertfordshire was a feast for all the senses and a marvellous opportunity for them to hear quality live chamber music in an atmospheric and historical setting.  All primary schools in the Welwyn-Hatfield area were invited to apply for some of the 300 free tickets. The concerts were vastly over-subscribed, but were also recorded and sent free to view, to all primary schools in Hertfordshire along with a teacher support package. The film can be viewed through this link:

Feedback from some of the children, staff and sponsors that attended the live concert:

“It was just brilliant and the children were completely thrilled to have been there. Fabulous! Talk about Awe and Wonder…..! Many thanks.” Mandy Evans  Headteacher  St John’s Primary School, Lemsford

“The children really enjoyed the day. They were full of excitement and discussing their favourite pieces on the way back home. They were inspired by hearing the different instruments and it has encouraged lots of discussion back in school.

We will look out for the recording of the concert and look forward to enjoying it all over again…” Alan Gardiner  Headteacher  Watchlytes Primary School, Welwyn Garden City

“Many thanks for inviting me today. I was very impressed with the concert. It was highly professional, imaginative and captivating for the audience. I thought the artist/ poet presentation was a brilliant idea. The musicians from Purcell played beautifully. I also thought you were great with the introduction and final words to the audience. I chatted to some of the children afterwards and they gave the concert 10/10 !!” Beth Fagg  Harpenden Music Foundation trustee 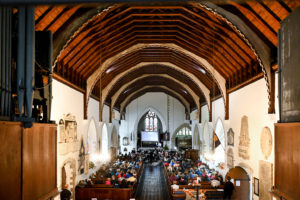 This exciting concert also featured students from The Purcell School for Young Musicians, but performing ‘side-by-side’ with our resident Festival professionals, all expertly directed by Paul Hoskins. It included five movements from Gustav Holst’s Planet Suite; Mars, Venus, Mercury, Jupiter and Uranus as well as an inspiring student composition by Philip Theodorou Thus Far. The concert also featured a wonderful ‘curtain-raiser’  performance of two of Finzi’s Five Bagatelles for Clarinet and Piano from Lily Payne and Firoze Madon.

James Mayhew kindly donated his paintings from this concert for auction; £570 was raised for Breaks Manor Youth and Community Centre in Hatfield. 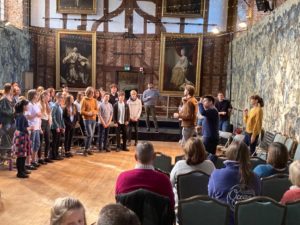 This was a fantastic opportunity for some of our finest young singers across Hertfordshire to work with the professional vocal ensemble, VOCES8 on their special vocal method and to prepare for singing ‘side-by-side’ with them in the Festival Finale Concert.

“We thoroughly enjoyed yesterday evening’s Finale Concert. To showcase the educational outreach activity of the Festival with both the youth choirs involved, worked extremely well and the whole festival team are to be congratulated on the outcome. The high quality on show, including the professionals, should encourage all involved in music education to not lose sight of the importance of music as a key part of general education.”  Peter and Maureen Bodden  concert attendees 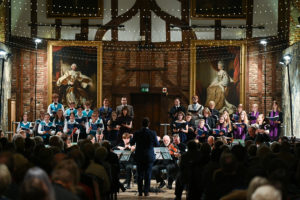 Across the Festival – Curtain Raisers and Young Musicians Platform

This was a new and exciting venture for the Festival in its 10th anniversary year. All secondary schools and music centres across Hertfordshire were invited to submit recordings of their students performing in chamber ensembles. The best of these were invited to perform live as ‘curtain-raisers’ at some of the Festival concerts and talks.  During 2021 performances from some of these ensembles have featured on the Young Musicians’ Platform page of our website, where you can also find further details of how to audition for this opportunity.

On Friday 1 October, an ensemble from Watford Grammar School for Girls performed the first movement of Mozart’s Clarinet Quintet in the Long Gallery as part of the pre-concert talk given by Stephen Johnson. 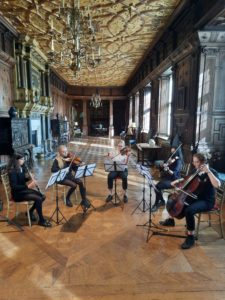 “Playing at Hatfield House was a lovely experience. The house was beautiful and it was incredible to perform Mozart’s Clarinet Quintet in such a historic building. We played in the long gallery, a room where many musicians centuries before us have also performed, so it was an honour to follow in their footsteps! On behalf of the Quintet I would like to say a massive thank you to Hatfield House for having us. It was an honour!”  Katherine, Watford Grammar School for Girls

Subscribe to our Newsletter: To keep up to date with all the latest Festival news, why not sign up for our e-newsletter?